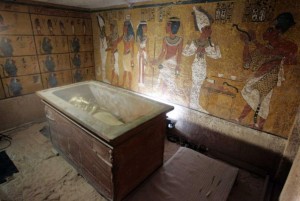 I have a great respect for the work of Zahi Hawass and despite the criticism often levelled at him regarding ego and personal aggrandisement, one has to admit he has attracted broad improvements and opportunites for Egypt and Egyptology during his time(s) in office.

However, I have to confess a concern as to the basis of his objections to the possibility of Nefertiti being buried in the Valley near Tutankhamen – is he just a little miffed that another is suddenly getting world attention on what could arguably be the world’s most important archeological find since Tutankhamun?  It would be behove him to quiet a little and be a little more generous with the opinions and intuition of others who are equally qualified and talented – and providing compelling results with their investigation into Tut’s tomb.

There is a question as to whether Nefertiti left Armana and re-established herself at Thebes after Akhenaton’s death, (or possibly even before?).  It has also been suggested that the Co-regent Smenkhkare (husband of Merytaten-daughter of Nefertiti and Akhenaten) may have left for Thebes and started re-establishing the old religious traditions and did not die as has been claimed in the 3rd year of his reign ….and further… even if the priests were against the burial of ‘the heretics’ in the Valley of the Kings, the priests would not have had the last say in how or where Nefertiti – or others of that period – were buried, but rather the succeeding Pharaoh (Tutankhamen) – also Grand Vizier Ay  (hypothesised father of Nefertiti - Ay was certainly present during the whole Armana period as well as prior in the form of a senior military officer during the reign of Amenhotep III), who became Pharoah after Tutankhamun for a short time.  The position of the priests of Amun had been severely weakened during the reign of Akhenaton, it would stand to reason they would be thrilled with the opportunity to re-establishing the old traditions.

It is generally understood that Nefertiti ruled as co-regent and perhaps (more speculatively), was even Pharaoh herself under another name before Tutankhamen –– although this is a theory disputed with evidence against, it does have its own compelling evidence and cannot be dismissed out of hand.   Recently reference to her  has been discovered telling us that she indeed was alive and well long after she ‘disappeared’ from reference at Armana.   Consequently, it is feasible that Tutankhamun would have had her buried in Thebes in the Valley of the Kings, as he also began to re-establish the old order before his death.  It would make sense that her relatively recent tomb was plundered to provide some of the necessary tribute for Tutankhamen’s early demise – this is another theory.   If there were still ambivalent feelings toward those who had lived in Armana and practised the worship of the Aten, then it makes the redistribution of grave goods from Nefertiti to Tut even more plausible.

CONCLUSION: Whether or not this is Nefertiti’s tomb, or anothers perhaps Smenkara or Kiya (mother of King Tut) or whether or not it is intact, what riches of knowledge there would be in consolidating such an exciting – and oft romantisized – period in Ancient Egypt.   Perhaps it may hold the final story of the extraordinary time of Armana and Akhenaton.  It is sad to hear Dr. Hawass talking in such (‘final’) ‘once and for all’ tone.   If some or all of the burial artifacts found in King Tut’s tomb were re-used from another tombs elsewhere for example, ..then the radar may not pick up any scattered papyrus, and definitely not the wealth of primary depictions that may still exist on the walls of this space, from ancient grafiti to actual historical depictions.   There are many anomalies about Tutankhamun’s burial chamber (and some of the artifacts) that suggest it is well worth exploring these rooms no matter what the radar reveals.  But right now I am reminded of the words of Om Sety who is quoted as having said: ‘it (the tomb of Nefertiti) – is very near the tomb of Tutankhamen….in a place where no-one would think of looking’.   Perhaps they should scanned the floor as well?